PGT-A (preimplantation genetic testing for aneuploidy) is a method of testing embryos for chromosomal abnormalities before transfer to the uterus.

Many in vitro fertilization (IVF) cycles end in disappointment due to the failure of the embryo to implant. One of the most common causes is an incorrect amount of genetic material (chromosomes) in the transferred embryo. Abnormalities like chromosome loss (monosomy) or an extra chromosome in the embryo (trisomy) are referred to as aneuploidy. The vast majority of embryos with these defects do not implant in the uterus at all. In some cases, the further development of aneuploid embryos results in spontaneous abortion at the beginning of pregnancy (first trimester). In exceptional cases, the chromosomal defect is compatible with further fetal development and, if not detected during prenatal care and screening, it may result in the birth of an affected child (e.g. Down syndrome with an extra chromosome 21). 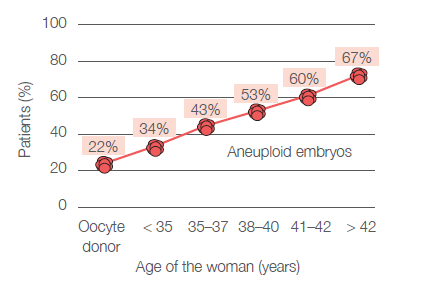 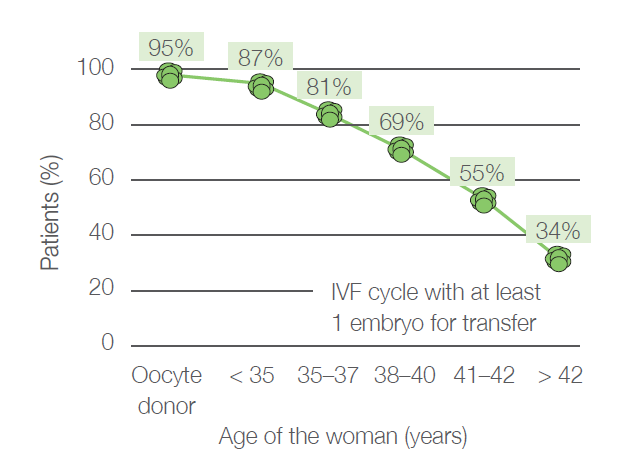 For whom is the PGT-A intended?

PGT-A testing is recommended and indicated by clinical geneticist, especially in situations where there is an increased risk of chromosomal defects in the embryos.

These are mainly the following cases:

● birth of a child or miscarriage of a fetus with a chromosomal abnormality,

● mosaic variations in the number of sex chromosomes in one of the partners,

● severe spermiogenesis disorders in the man,

● history of chemotherapy or radiotherapy in one of the partners.

However, PGT-A can be performed for any couple undergoing IVF who want to be sure that an embryo with the wrong number of chromosomes is not transferred. In case of unsuccessful implantation, it is then possible to exclude this cause as a reason for the failure of IVF cycles.

How is the PGT-A performed?

The couple undergo an IVF cycle in which oocytes are sampled and fertilised. In the embryology laboratory, embryos are cultured and monitored during development until they reach the blastocyst stage on day 5 or 6 after fertilisation. At this point, an embryologist removes 5-10 cells from the trophectoderm, which is the part of the embryo that gives rise to the amniotic sac and placenta. The part of the embryo that later develops into the fetus itself remains untouched during sampling. The embryos are then frozen and the samples are sent for testing to a laboratory specialized in PGT.

Testing in the PGT laboratory is performed using molecular genetics methods based on PCR and the latest technologies, such as next-generation sequencing (NGS). The result of the testing is usually available within 2 weeks. In case of normal results, the embryo is transferred in a subsequent cycle.

What results should I expect?

Tested embryos can be divided into 4 basic groups according to the conclusion of the testing and recommendations for next steps: 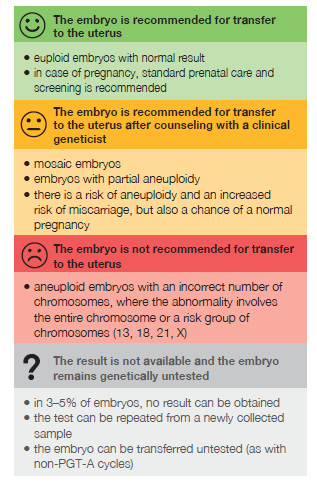 What are the limitations of PGT-A and its reliability?

● Processing a small sample size and the low number of cells available for genetic testing can lead to 3–5% of embryos not yielding a result. However, untested embryos can usually be thawed again and the whole test repeated, or it is possible to perform the transfer of an untested embryo.

● PGT-A can identify embryos suitable for transfer with greater than 97% accuracy, but it cannot detect abnormalities caused by random mutations and other developmental defects that have no clear genetic cause (these occur even in 3–5% of non-IVF pregnancies). Therefore, for PGT-A pregnancies the same prenatal care and screening is recommended as for any other pregnancy.

● Sampled trophectoderm cells may not always be 100% representative of the genetic information in the remaining part of the embryo. Testing of the embryo at a very early stage of development may reveal random genetic abnormalities in 5–10% of embryos, which usually disappear during further development (mosaic aneuploidies, partial chromosome aneuploidies). In some cases, these abnormalities may be associated with health risks to the fetus and for the pregnancy. However, such embryos still have significant potential for a successful pregnancy and the delivery of a healthy baby. Their transfer to the uterus is therefore possible after discussing other treatment options with an IVF specialist and after consultation with a clinical geneticist based on an assessment of the specific findings.

● If the number of eggs and fertilised embryos collected is low, it may be that only a few embryos reach the blastocyst stage and all of them carry a chromosomal abnormality. PGT-A can reveal this unpleasant situation, but it is not the cause of it and unfortunately it cannot solve it. 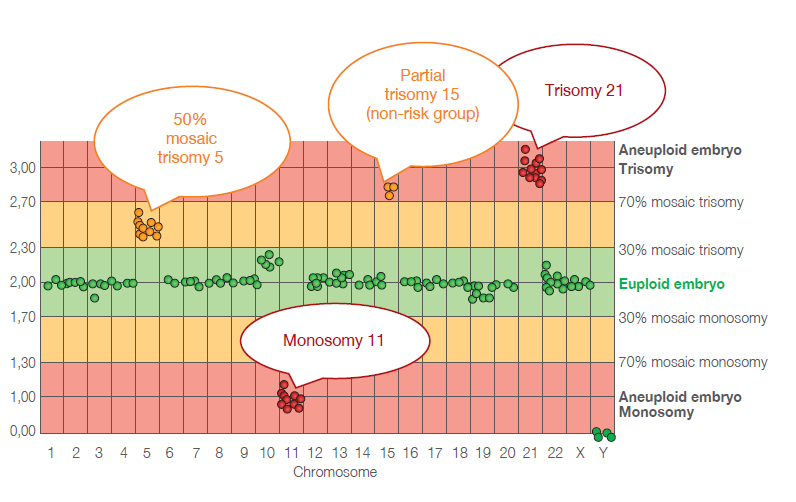 What are the objectives of PGT-A?

The goal of PGT-A is to shorten the time to conception and the birth of a healthy child by eliminating embryos with chromosomal defects from transfer to the uterus. The transfer of such embryos tends to be unsuccessful and in cases of spontaneous abortion due to aneuploidy, the time to transfer of another embryo may be prolonged by several months, especially if a revision of the uterine cavity is necessary.

Performing PGT-A on embryos does not guarantee a pregnancy, but it supports the success of the treatment mainly through:

● reducing the number of unsuccessful transfers and associated psychological burden,

● reducing the number of spontaneous abortions,

● reducing the risk of pregnancy with a fetus carrying a chromosomal defect,

● eliminating non-viable embryos, which saves the cost of useless transfers and reduces the average time to deliver a healthy baby within infertility treatment,

● the fact that it provides useful information for patients, which can guide the choice of further treatment, for example using donated eggs, sperm or embryos.

Before performing PGT-A, a professional assessment of all unique circumstances of the couple being treated is advisable. A consultation with an IVF specialist may be helpful, who can then include PGT-A as part of the treatment regimen.

After consultation with a clinical geneticist, PGT-A is covered by health insurance in indicated cases where there is an increased risk of chromosomal abnormalities in the embryo.

In other cases, at the couple's request, PGT-A can be offered with direct payment, according to the clinic's price list.